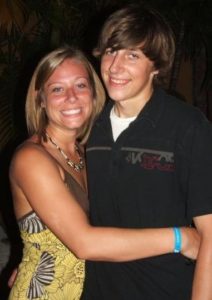 It was the spring of 2009. I was preparing to graduate from college with my undergraduate degree when I received a phone call from my 19-year-old brother, Bobby. Looking back, I realize that phone call would mark the first notch on a very long timeline that chronicled the worst four years and, eventually, the greatest loss of my life.

He asked for the phone number of our primary physician. I was confused because he was living at home and had a close relationship with our parents. If he was sick, he could ask them. There was no way I could help him from 100 miles away. When I asked him why he needed the contact information he said, “I think I have a problem with pills and I need help, but I don’t want mom or dad to know.”

I didn’t know what to do. I gave him the phone number, told him I would drive home immediately to help him, hung up and started packing my bags. He called me back and said, “Ame, I got this. Don’t worry. Stay at school, study for your finals and I’ll let you know how it goes.” We never talked about that conversation again.

It was the first of many times that my love for him, my loyalty to him and my downright denial of the root of his behaviors would prevent me from doing anything more than exactly what he asked of me. That conversation still haunts me today.

Bobby’s entire life up until 2009 seemed as ordinary as mine. We lived in the same house with the same parents, played the same sports, had the same neighborhood friends and had an extremely strong sibling bond. To this day, I cannot wrap my head around what might have led him into the path of addiction.

Hindsight is always 20/20, they say. Living with my brother’s addiction has certainly convinced me this is true. In the years to follow, my brother struggled and struggled some more. No one knew just how bad it was until it was bad enough to know. He moved from pills to heroin and the chaos ensued. As each event unfolded, we continued to enter uncharted territory. The strange thing about living in someone else’s addiction is that you are doing just that – living it with them, learning it with them, making mistakes with them and doing it over and over and over again until it becomes life and death.

For four years, I stood by and watched my brother go from a fun-loving, hysterical, thoughtful man who was a phenomenal athlete, a hard worker and super family-oriented to an angry, withdrawn, zombie-like creature who didn’t care about anyone or anything, even his own existence. My brother lied, he stole, he broke the law many times – sometimes he served real consequences and sometimes he didn’t. All the while, he presented no remorse for his actions. The heroin didn’t allow him to. The heroin changed his behaviors, his priorities and his brain chemistry. The heroin took my brother.

On Sept. 22, 2013, Bobby died from a fentanyl overdose. He called me the day before and asked if we could spend time together – to let our dogs play. Maybe I should have said yes. It sounds so sweet, but these calls would inevitably segue into asking me for money or a ride when he was using. I told him, “Today isn’t a good day. I have to go to a birthday party and do a bunch of other things. I’ll call you tomorrow.”

That was the last conversation I had with my brother. The next day, I called him, just as I promised – 12 times to be exact. I texted him once, asking, “Why are you ignoring me?” When I got no response, I gathered my courage and asked my husband to go with me to check on him. We broke in the back door of my childhood home to find him lifeless on the couch. There was nothing we could do to save him. It was the moment we had all dreaded – a moment I still have nightmares about.

There are so many things about living someone else’s addiction that affect you for life, especially if you lose that person to their addiction. The memories you have are always a double-edged sword.

For every fond memory you have of when they were clean and sober or of them during their childhood, there is always a second one that creeps in to remind you of who they were right before you lost them. You question yourself. You wonder if it was your fault. You ask yourself if there was more you could have done. When you live someone else’s addiction, you are powerless to change it, no matter what it brings. Their addiction becomes your own and it lives on even if they don’t.

Don’t get me wrong. There is light at the end of the tunnel. You live your days remembering your loved one. You savor the peace you feel from the good memories. You reminisce about the days when things were easy and your relationship with them was not burdened by their addiction. Your heart still smiles whenever you think of them. If you are able to let the good memories outweigh the bad, you can make it through on that alone.

I stand by those words today. I would scream it from the rooftops if it would bring him back, but it won’t. I write this story to share it with the world in hopes that one person, maybe a sister just like me, will read it and take action to learn about and see the signs of her brother’s opioid addiction way before I did.

I hope this story compels just one person to take action and become a Mental Health First Aider. Mental Health First Aid will teach you to recognize the signs and symptoms of addiction early on, understand what to say to your loved one, and know how to help before it’s too late. Stories like mine and like the Werner’s are far from the only ones, but yours can be different. You can be the difference.