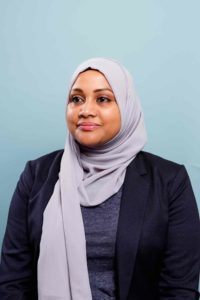 “Hello, I am the protective factor,” was the unorthodox greeting I recently received following congregational prayer in my local mosque. The elderly gentleman who approached me was a participant in a Mental Health First Aid class a few weeks prior. He went on to explain that in the class he learned that youth need to feel close to at least one adult as a protective factor against developing mental health challenges. He was that adult for his middle school-aged grandson. He said, “I ask him if he is being bullied in school or if there’s anything he wants to discuss that he cannot tell his parents.”

In the community, trainers like Samara Ahmed and Mamunur Rahman have reached over a thousand participants from all walks of life in the Muslim community, from non-native English speakers in mosques to elderly immigrants in community centers. Mental Health First Aid has helped build bridges and bring the community together.

In my local Queens mosque, Bengali parents share stories of substance use among their young adults. These are not stories of addiction, but intricate pictures of living with the challenges of adolescence and the hardships faced in emerging adulthood. During my trainings, I recognized that similar discussions and questions were popping up at another mosque 15 miles away in the Bronx.

It is times like this when the creed of Mental Health First Aid can be felt throughout the room, with everyone nodding in agreement: mental illness does not know race, socioeconomics or the demographics of its sufferers. No one is exempt from the risks. The only logical course of action that is left is having the fortitude to apply the Mental Health First Aid 5-step action plan, ALGEE, to recognize the signs and symptoms of a mental illness or an emotional crisis.

Abeda Khanam is a public school science teacher in New York City and works with ThriveNYC as a Mental Health First Aid Instructor. Her focus is helping build resilience against mental illness at the family and community levels.