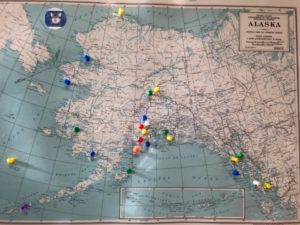 Ramsey keeps a map of where she and her team have traveled to teach Mental Health First Aid across the state.

Jill Ramsey, a Mental Health First Aid Instructor, traveled more than 700 miles to teach a course in St. Paul, a remote native town in the Pribilof Islands off the coast of Alaska.

Her students included the one health care provider, the lone teacher, the two law enforcement officers, the Russian Orthodox priest and even the grocery store owner – nearly every person in town attended the Mental Health First Aid training.

“I had everybody there,” Ramsey said. “It was amazing – my favorite training so far.”

Mental Health First Aid teaches people to identify, understand and respond to signs of mental health or substance use issues. When Ramsey arrived at St. Paul, she encountered a community of people who genuinely wanted to help each other.

“I will go to the ends of the Earth to respond to that,” she said.

And she practically does, encountering her share of challenges along the way. When trying to leave St. Paul, cloud cover grounded her for four days, so she went hiking to see more of the island and kill time until a plane could arrive.

Sometimes, even after adventurous treks like the one to St. Paul, you never know the true impact you had, Ramsey said.

But someone from St. Paul sent her an email.

“They told me the priest incorporated Mental Health First Aid in the next sermon,” Ramsey said. “He turned around on talking about suicide. Hearing about that kind of stuff lights you up.”

For seven-and-a-half years, Ramsey has worked for The Alaska Training Cooperative. Initially, implementing Mental Health First Aid in Alaska was just part of her job. Working on the course wasn’t intended to be her full-time job, but she took the task very seriously. Now, countless organizations and communities in Alaska have taken the course, from state troopers and staff from the Department of Corrections to politicians to ushers at performing arts centers and priests.

She helped bring Alaska from having zero people trained to more than 10,000.

“I was so excited at all of the interest of people who wanted to learn how to help other people,” she said. “That just lit me on fire.”

Ramsey’s now supported by 10 other people teaching the Adult curriculum, while another group of about 40 Instructors teach the Youth curriculum – a course for adults so they can better support youth in their communities.

Ramsey and her team have reached 34 cities across the state, which is formidable, considering much of Alaska isn’t on a road system.

One of Ramsey’s most memorable classes was in a village with a population of about 800. She first flew to the remote town of Kotzebue, then boarded a small plane to the destination on a river, where there are no traditional vehicles – ATVs and four-wheelers traverse the landscape. She said the training took place in a community center that looked like a bingo hall, where they incorporated Alaskan social issues – like the colonization of the native people – into the conversation. She and her co-Instructor slept in sleeping bags at the hardware store.

“The things we were talking about were happening outside, out the window,” she said.

“There were multiple times we were doing Mental Health First Aid as well as teaching it.”

Ramsey and more than 13,000 Instructors across the country work tirelessly to spread the course to as many Americans as possible. The curriculum features a five-step action plan called ALGEE that helps people respond to and support those who are experiencing mental health or substance use problems.

While it’s difficult to measure the full impact, the feedback Instructors receive speaks for itself.

“A man came into my office for a Medicaid intake and to complete all the necessary paperwork to enroll,” said an Alaskan who took the course from Ramsey. “As we were talking, I heard significant warning signs. Inside, I began to panic a little and out of nowhere, I thought of ALGEE…. After many conversations and asking the right questions, we determined together to go to the hospital…. A year later, almost to the day, the man came back into my office to see me and to thank me for saving his life.… So, I want you to know, whatever you may think of the class at the time or with whatever else is going on, it really does work.”

More than 1.4 million people across the country have taken the Mental Health First Aid course. Join the movement today.