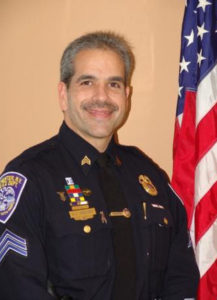 “If I don’t tell you something, I’m going to kill myself.”

I said these words to my then-wife in the fall of 1995. I had been working for my police department for nine years and had been a police sergeant for the last three. I was the training coordinator for our SWAT team, as well as a sniper and entry team leader, and commanded my own platoon of proactive, hard-charging officers.

Given my very tough exterior, the words were hard for her to hear, and even harder for me to say. I told her that I would get help on the condition that she kept my secret to herself. After all, what would people say if they found out that I, Sgt. Eric Weaver, was seriously contemplating killing himself?

I spent the next several months bouncing between therapist and out-patient treatment centers. When it got to the point that I no longer felt safe at work or home because of my extreme depression and suicidal condition, I admitted myself to a hospital. But I told my police department that I threw my back out while exercising.

I was discharged from the hospital after one week and provided a treatment plan to follow up with some doctors for counseling and medication. As I sat home that following week, still out of work with my “back injury,” I began to realize that my depression and thoughts of suicide were not going away – in fact they were getting worse. Soon, I found myself locked in my bathroom trying to commit suicide again.

I was hospitalized a total of five times that year. But believe it or not, after undergoing intense treatment, which included various medications and electroshock treatments, I was eventually cleared to return to work. I felt I needed to work in order be whole again.

The first day back, I was nervous. Nervous about what people were thinking, what they were going to say. I was asked the same question over and over: “So, Sarge, how’s your back?” I was shocked. I had been in and out of psychiatric hospitals five times, out of work for nearly six months, and yet no one had a clue. I was relieved and life was good.

The next couple years were relatively smooth. I was back working on SWAT and had been hand-selected for our Tactical Unit. Again, life appeared to be good, but my behavior wasn’t. I became aggressive, belligerent and forceful. Ultimately, I was removed from the SWAT team, the Tactical Unit, suspended for 15 days and removed entirely from patrol to serve time on administrative duty for one full year. My rank was the only thing I was allowed to retain. My life as I had known it felt officially over.

Again, I found myself attempting suicide. I wanted everyone to know how much I was hurting inside. I was sitting on the locker room floor of my department’s office, ready to pull the trigger of my gun, when I heard someone walk in the door and turn on the water. I didn’t want anyone around when I killed myself – it was personal and I wanted to be alone. So I got up.

It turned out there was no one in the locker room with me that day. I assume it was my imagination – or a greater power – at work in that moment. I went directly to tell my wife and admitted myself to the same psychiatric hospital I had been in two years before.

Remarkably, I didn’t kill myself that day because of the phantom sounds of running water from a sink. It was many years later that I discovered what God’s plans were for me in my life, and they did not include killing myself in a police locker room. I returned to work just a few short weeks later, which is where the real story begins.

Eric Weaver is a retired sergeant from the Rochester, N.Y., Police Department and is currently the executive director of his own training and consulting group, Overcoming The Darkness. Eric is a National Trainer for Mental Health First Aid and co-author of the Mental Health First Aid for Public Safety manual. For more information on Eric and his list of trainings, please visit www.overcomingthedarkness.com.