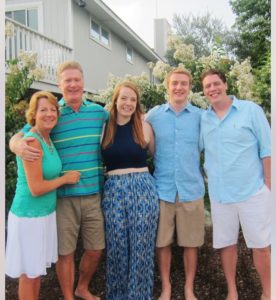 Our oldest child, Jamie, died of a fentanyl overdose two years ago at the age of 27. We miss him every day and often reminisce and recall many fond memories of his life.

As a toddler, he was incredibly spirited and curious, always pushing the limits that we set. When he was two-years-old, he would run for the street when Debbie was pushing his younger sister in a stroller and couldn’t chase him. When Jamie was about five, Debbie realized that she worried about him more than his two younger siblings combined. She felt that it would always be that way, and she was right.

As he grew older his curiosity and enthusiasm for life also grew. He loved to read and had deep and varied interests. He also loved to cook and, as a teenager, became the chef for our sometimes large family gatherings. We would often get in arguments with him about how much food to buy and how many different dishes we needed (he wanted more of both!) but we would also eventually agree that the results were delicious. And, it was always fun.

He was always a big talker, regaling us over dinner about his day at school or telling us in great detail about what he planned to cook next. When he was in his early twenties, we realized that his behavior sometimes could be described as “manic.” Mostly, it was his positive energy bursting out from his big personality. But, at other times, he could also be depressed and quiet.

In his mid-twenties, we convinced Jamie to see a mental health professional who diagnosed him with bipolar disorder. At around this same time, his loved ones noticed that his behavior was becoming somewhat erratic, to the point that you couldn’t always count on him. It occurred to us that he might be using drugs, but his insistent denials, combined with our own, put those thoughts to rest for a good while.

Finally, about two months before he died, he agreed to take a drug test. He tested positive for heroin use. He STILL wouldn’t admit it and tried to convince us that the test was faulty. He was so good at arguing his position that he created a slight doubt in our minds about the test. And, of course, you always want to believe your child. Jamie died in February of 2017, never having sought treatment and never admitting that he was using opiates.

Looking back, there were so many signs, but between our denial and his always-ready explanations for his behavior, we never really came to grips with his issues. Some typical signs of someone with an addiction or substance use disorder are not caring about their appearance, acting erratically, impulsively and not seeming to care about things they used to care about. They can also leave things around like lighters, baggies, straws and perhaps a powdery residue on surfaces.

Many people with mental health issues self-medicate with pills or opioids, trying to quiet their mind and dull the pain. It’s similar to many folks who want a drink after a tough day at the office. It’s about trying to shut off the bad or uncomfortable thoughts. We don’t know exactly how or when Jamie started, but we’re fairly sure he got ahold of some opioid painkillers a few years ago. From there, his path included switching to heroin when prescription pills become harder to get, then getting that fatal dose of fentanyl – likely unbeknownst to him.

When thinking about how to alleviate our national opioid crisis, the key things that need to happen, in our view, are: 1) reduce the total number of opioid pills prescribed, which is happening slowly; 2) make addiction treatment available for more who need it and include medication-assisted treatment (MAT); 3) reduce the stigma that families and individuals endure in an addiction situation; 4) make mental health treatment more widely available for those in need; and 5) get more people certified in Mental Health First Aid (MHFA).

We have both decided to become certified Mental Health First Aiders and join more than 1.5 million people nationwide who have been trained. We will learn how to identify, understand and respond to signs of mental illnesses and substance use disorders.

We will never forget Jamie and his memory will always both comfort and sadden us, but we think he would be proud of all of us as we learn new skills and work to expand treatment options for those in need. It also makes us hopeful for the future of this crisis and for those suffering with addiction and mental health issues.

Rick and Debbie Werner lost their oldest son, Jamie, to a fentanyl overdose two years ago. They are now certified Mental Health First Aiders and hope to inspire other families to get trained so they can avoid tragedies like Jamie’s death.