This article originally appeared on www.BravadoHealth.com. Read it here.

Jack had battled depression in the past. At the time his parent’s sought counseling and Jack seemed to be doing well during the year prior to his suicide. By all accounts, Jack had kissed hopelessness and depression goodbye, and was looking forward to the future.

My son, Tristan, having just returned from New York City and figuring out his next move, spent a lot of time with Jack. In fact, just the night before that tragic day in July, Jack was in good spirits. He was excited about becoming roommates with my son and a possible new job. Nobody knew that would be Tristan’s last conversation with his friend.

The night before, Jack had an amazing evening with his mother, father, and two brothers; however, the next morning Jack would scribe a farewell on social media to his friends and family, leaving no time for anyone to intervene. With only seconds to respond, it turned out to be too late.

Jack and his best friend, Tristan.

An All Too Common Tale

Hopelessness happens. Depression sets in before identifiable symptoms start to appear. It happens to the best. The brightest. The compassionate. The loved. The unexpecting.

The source of depression is different for everyone. It can be a single event, a series of circumstances, a harsh word spoken, or even a prescribed medication. Although depression doesn’t always end tragically, an alarming number of depression diagnoses are appearing among our young generation.

NBC News published an article on May 11, 2018 covering recently published findings on commercial claims data regarding depression. While the data does not account for unreported depression or those without a commercial health plan, the statistics are still staggering. Depression diagnosed in teenagers and young adults has risen dramatically from 2013 to 2016.

Depression among 35 to 49-year-olds is still most prevalent at 5.8 percent. It’s worth noting, however, that most of the patients diagnosed in this age group have other medical conditions. Typically, these conditions are chronic in nature, and accompany or are a precursor to the diagnosis of depression.

Awareness is the First Step

The Centers for Disease Control and Prevention (CDC) has been monitoring the surge of depression among our youth, and report that approximately 15 million children ages 3-17 have a mental, emotional, or behavioral disorder diagnosed annually; however, only 20 percent of them receive treatment.

The CDC also convey the following as common risk factors for depression:

In addition to the CDC, members of the medical community are weighing in on what they feel is a likely underlying cause of increased depression among youth: The Digital World, and more specifically, social media. Over the past couple of decades, social media has impacted every generation, but none more than children and young adults.

Dr. Laurel Williams, Chief of Psychiatry at Texas Children’s Hospital says, “Many people are worried about how busy they [children] are. There’s a lack of community. There’s the amount of time we spend in front of screens and not in front of other people. If you don’t have community to reach out to, then your hopelessness doesn’t have a place to go.”

While social media helps some people connect and find a likeminded community to join, it can also have the opposite effect, isolating others and piling on pressure, according to Dr. Williams.

Dr. Karyn Horowitz of Bradley Hospital in Rhode Island also cites social media as a major factor for the rise in youth depression. “For some kids, video games can become an addiction leading to social isolation, poor school performance, and impaired sleep,” she says. 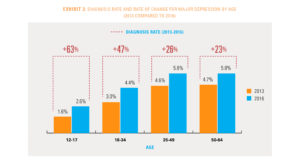 NBC News, Depression rate and rate of change for major depression by age, May 2018

A Call to Action for Everyone

A substantial amount of research and study needs to be done on the profound impact of the digital era on depression. We can’t let that stop us from working together and fighting for solutions today—as parents, educators, leaders, healers, innovators, and even payors.

At Bravado Health we can’t help but focus our vision on disrupting depression and other chronic conditions. One of our goals is to improve the way we engage patients at critical times, after and between care visits.

Childhood vaccinations are used to produce immunity against a disease with a small dose of the live virus. What can we learn from the success of inoculation? Perhaps the solution to bolstering self-esteem and building defenses against depression in the digital era lies with our approach to technology itself.

Artificial intelligence (AI), an increasingly prevalent part of new technology, has become a part of daily life. Technology giants having created a new market for personal digital assistants with brands like Alexa and Siri. There are apps that automate directions (even cars that drive themselves), apps that understand what you’re saying, apps that remind you, and apps that personalize your experience based on your personal habits. If you perform an online search for a local auto repair shop, it’s likely the next sponsored ad you see will be a 20 percent discount on tires from a local mechanic. It’s no coincidence.

It’s Our Duty To Do the Right Thing

As a digital company, I believe we have a responsibility to help solve this unintended consequence of digitalization. One of the top priorities for Bravado Health is working on new ways of helping those living with depression, along with other chronic conditions.

AI has the potential to connect with younger people on their terms, based upon actions, keywords and phrases. What if technology could help detect warning signs early, before thoughts of “depression” or “hopelessness” enter the child’s mind? The same technology could be used to engage that child, alert a parent, notify a teacher or contact an EMS service and possibly save a life.

I wonder what would’ve happened if Ayva was available on that fateful day in July 2017. What if the intervention was instantaneous, rather than seconds or minutes later, which ultimately couldn’t be overcome despite the best effort of Jack’s brother and best friend? Stories like Jack’s drive our vision of a world where depression doesn’t take hold of our youth.

To learn how to recognize and respond to signs and symptoms of mental health and substance use challenges specific to young people, register to attend a Youth Mental Health First Aid training course today.