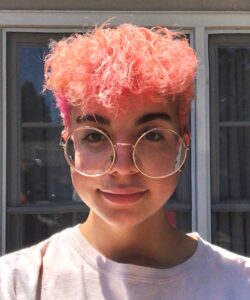 Since I came out as transgender in seventh grade, I’ve worn the same black boots — black, thick-toed, lace-up. (Not the same pair, though, although not for lack of trying. My last pair became more duct tape than boot, and my mom eventually threw them away before they fully disintegrated.) My black boots have become a staple for me.

People find my boots — and me — intimidating sometimes, at least upon first glance. The rest of my appearance has that effect too, with my often poorly dyed hair and generally odd and mismatched thrift store-sourced wardrobe. See, when you’re transgender, your identity is deeply policed. Cisgender is considered the standard, and that leads to so much judgement surrounding every decision you make as soon as you come out as trans.

When I was young, I had no idea what made me different, only that I felt wrong in my body in a way no one else seemed to. I hadn’t heard of the term “transgender” until I came across it online, and suddenly a lot of the self-loathing I’d been experiencing started to make sense. There are not a lot of positive narratives about transgender people. Upon understanding my identity, I also saw that cis people felt it was something I should be ashamed of. Self-harm became an outlet for some of that embarrassment and hatred toward my body. I often felt as if it would be easier for everyone else if I wasn’t there, because I knew I sparked confusion and fear in my classmates, parents and strangers alike just by existing.

I internalized the expectation that the goal of trans people must be to appear as cisgender as possible, so even with varying degrees of love and acceptance around me, I succumbed to the societal pressure on trans people to hate ourselves for just being who we are. Later, I was hospitalized for suicidal ideation, then released, then sent back, then sent to a longer-term residential program in Los Angeles. Hospital staff had a hard time knowing what to do with me, because I was transgender. Housing, bathrooms, groupings — our binary system is created to discount and disregard trans people. I’m a lucky one, too: I had the privilege to afford mental health services that wouldn’t try to change me, and I never had to deal with the compounding hatred and bias that trans people of color face. Still, it was so isolating and embarrassing and painful to feel like a burden for just being who I was.

However, in my time in hospital, I also first experienced real, meaningful acceptance, and it came from the other patients. Mental illness, like being trans, is often feared and deeply misunderstood. People who are not forced to confront the reality of it in their own lives shy away from the topic because it makes them uncomfortable. Mentally ill people are told that mental illness is wrong, that it warrants hate and shame. So while I still did not know another transgender person, I met people who saw the power of shame and countered it with an active effort toward acceptance and away from judgement.

I’ve come a long, long way since coming out.

Now I’m going into my senior year in high school, and I understand that my identity is not a problem, that the people who are resistant to change because they’re accustomed to a flawed binary worldview are the problem. The confusion and fear that people might feel when they see me — black boots and dyed hair, transgender, mentally ill and proud — is not a reason for me to hide who I am, but incentive to be even prouder. I get to use my experiences and my identity to educate others and show them why their behavior unknowingly perpetuates transphobia and stigma.

I contribute to this movement through activism and advocacy, whether it’s getting gender neutral bathrooms at my school, helping the school redo the whole system of gender-divided overnight trips, organizing teens to run mental health education initiatives in my community, or educating myself about the experiences of other people — Black, and Indigenous and people of color, immigrants, the disability community and anyone else who faces the brunt of society’s ignorance and erasure.

I work to show how the systems and standards we have in place for gender and mental health are inherently broken, that we should not bend the system to accommodate for the few that don’t fit but instead rewrite the whole program so that every person fits, equally and unequivocally. This is what teen Mental Health First Aid helps to do, and why I believe in its mission so much: Kids can help educate each other so that we can help support each other. No one will be left behind.

Learn more about teen Mental Health First Aid and how you can bring the program to a school or youth-serving organization near you.

Novak, a rising senior in California, spends much of his time studying science, advocating for social justice, and playing with his cat. He works with Safespace, a local mental health organization, and engages in activism in many other areas, including LGBT issues, environmentalism, racial justice, and wealth inequity. When not doing school work or advocacy work, he enjoys traveling, changing his hair color, and tending to his vegetable garden.